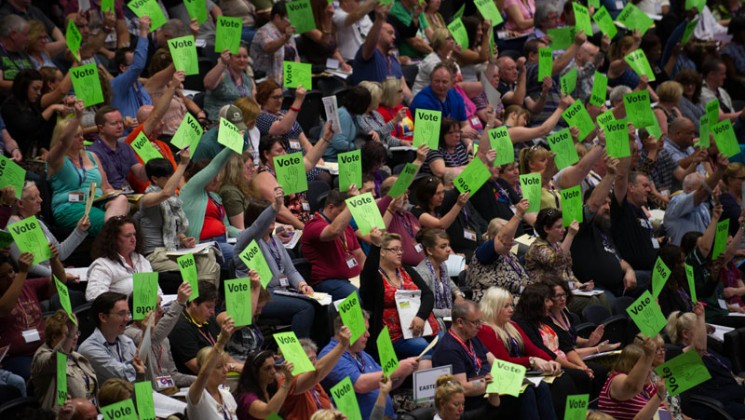 Conference fully supports the TUC campaign to increase employment through a substantial increase in ‘climate jobs’ but is concerned about the impact of CO2 emissions and the resulting accelerated global warming caused by burning fossil fuels when adequate clean alternatives are available.

Local Government Pension Funds in the UK have assets worth over £230 billion. £14 billion of this – over 6% – is invested into fossil fuel corporations through their 101 pension’s funds, responsible for 4.6 million employees.

We now know that 80% of the world’s oil, coal and gas reserves need to stay in the ground to prevent catastrophic climate change.

This is a moral argument.

Pensions are for our and our families’ future. But that future is threatened by fossil fuel extraction.  Without bold action to keep 80% of fossil fuels in the ground, a changing climate will have devastating consequences for people, societies and ecosystems around the world. By investing £14 billion in fossil fuel extraction, our local governments are providing resources that accelerate climate change. As public bodies, local governments have a responsibility to work for the public good; they shouldn’t be financially and politically supporting the most destructive industry on the planet. Fossil fuel investments undermine existing local authority climate change mitigation; adaptation strategies and commitments.

It is also a financial argument.

When governments finally take climate change seriously and legislate to leave fossil fuels in the ground, shares in oil, gas and coal will become worthless. Funds which don’t invest in fossil fuels often perform as well or better than fossil-fuel heavy funds, so divestment does not mean that existing pension funds lose out. Making 4.6 million public sector pensions dependent on long term profits from an industry threatening a safe planetary future is not a sensible investment strategy. When local governments allow pensions to be exposed to fossil fuels, they’re relying on stranded assets for the safe retirement of their workers.

As continued investments in fossil fuels pose material financial risks to portfolios, funds have fiduciary duties to consider the benefits of decarbonising as part of their investment strategies. Furthermore, Trustees may consider non-financial factors if members share the concern and there is no risk of significant financial detriment to the fund – which is increasingly the case for divestment.

And it is a public benefit argument.

£14 billion could build over 200,000 homes or generate more electricity than Scotland uses.  By investing this capital into renewable energy, public transport and social housing, local government could create jobs and boost local economies, while protecting pensions in the long term.

Investing into fossil fuel multinationals does not support local jobs, economies or infrastructure.  Other than the return on capital, there are no real social or economic benefits for local government – or for residents whose council tax goes into the Pension fund. Further, every £1 spent on construction generates a further £2.09 on economic activity, higher than the return to most other sectors including advanced manufacturing and finance.

By divesting the £14 billion currently invested in fossil fuels, local councils can take an important step forwards in challenging climate change. Reinvesting this money into renewables, housing and public transport is a feasible and sensible strategy for providing a long term return and building safe pensions for public sector workers.

As well as providing safer long term returns for pensions, all of these would create local jobs, improve the lives of local residents and boost local economies more than investing into multinational fossil fuel companies.

In some cases, this is already becoming a reality.

Lancashire County Council invested £12 million in Westmill Solar Coop, the UK’s largest community owned solar farm. The solar farm has 1,648 members, who all bought shares in the project. Lancashire and the individual members will receive interest for 23 years, with a projected 11% annual return.

Local authorities could also invest in larger renewables energy projects, including offshore wind. The City of Copenhagen co-owns the Middelgrunden Offshore wind farm, together with a residents co-operative. The wind farm is 3.5 kilometres off the coast of Copenhagen, and provides 4% of the Danish capital’s electricity.

Many councils already have property in their portfolios. But some, like Greater Manchester, are leading the way in investing into social housing. Islington Pension Fund is planning to put £150 million – 15% of its pension pot – into social housing – arguing that this offers more stable and guaranteed income and return than the private sector.

A Treasury-commissioned study published in February 2015 argued that local authorities should invest £5 billion from their pension funds to create a “substantial increase in new homes nationally”.

The local government pension fund with the least exposure to oil, gas and coal is Lancashire County Pension Fund with 1.9%, whilst the LGPF with the highest exposure is GMPF who have the highest proportion of all the schemes.

By divesting fossil fuel holdings, local governments across the country will free up capital that can be invested more usefully, boost local economies, and provide public benefit while potentially generating a higher return than fossil fuels will over the next generation.

Pensions can be harnessed to drive the energy transition, create local jobs and support local innovation. Pensions can be more effectively put to work by creating and retaining value in local economies, while establishing new community ownership models. The long term nature of pension investments allows for the support of infrastructure essential in reducing inequality and meeting climate commitments, including social housing, public transport and renewable energy.

Local authorities in the UK led the way on divesting from apartheid in the 1980s. They did so again with the tobacco industry and today UNISON policy actively promotes divestment as part of its campaign against the occupation of Palestine.