Local government members to be consulted on pay offer 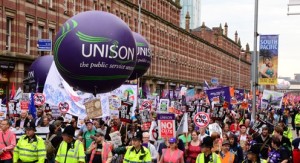 Local government members will be consulted in the new year on the employers’ pay offer for 2016 and 2017, in England, Wales and Northern Ireland.

Following negotiations with the unions on 9 December, the Local Government Employers made their final offer concerning a pay deal that would cover the two years from April 2016.

The increases at the bottom end of the pay scale are designed to meet the employers’ legal obligations to comply with the Chancellor’s ‘national living wage’ (that will be £7.20 an hour next April and £9 an hour by the end of the Parliament).

The employers also refused the unions’ demand that other workforce terms and conditions such as annual leave and sick pay be protected.

They did however agree to a joint review of term-time working for school support staff if their pay offer were to be accepted.

The NJC unions believe that negotiations are now exhausted and will be consulting their members. UNISON’s NJC committee meets on 7 January to decide its recommendation on the offer and the nature of the consultation process.

The NJC joint unions – UNISON, Unite and GMB – will meet in February after the consultations to decide their next steps.