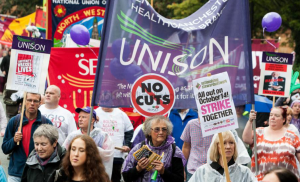 NHS staff have been denied a pay rise following the Government’s decision to ignore the independent Pay Review Body (PRB) recommendation. This means 60% of NHS staff and 70% of nurses won’t get a pay rise for the next two years.

The result of the ballot is as follows:

Are you prepared to take part in a strike?

Are you prepared to take part in action short of strike action?

“This government’s treatment of NHS workers has angered them and this anger has now turned into action. Refusing to pay them even a paltry 1% shows what the government really thinks about its health workers. Inflation has continued to rise since 2011 and the value of NHS pay has fallen by around 12%.

“We know health workers don’t take strike action lightly or often. The last action over pay was 32 years ago.  But we also know a demoralised and demotivated workforce isn’t good for patients.

“If we move into industrial action we will work with NHS employers to minimise the impact on patients. But it’s not too late for Jeremy Hunt to act to avoid this and we repeat our offer to the government to negotiate with us. To date the Secretary of State has refused to meet with health unions to negotiate pay.”

Earlier this year, the government decided to ignore the NHS Pay Review Body’s recommendations and instead give a 1% non-consolidated increase only to staff at the top of their incremental scale. Because the award is non-consolidated it will not count towards pension entitlements or shift pay and will be wiped away at the end of March 2016, meaning wages will go back to their April 2013 level.

Jeremy Hunt is persisting in the pretence that he is giving staff a pay rise when in truth he has imposed a continued pay freeze for most NHS staff in England, with a small flat rate sum for around 40% of staff.

There are 10 unions balloting in the NHS over pay and we will now be coordinating with them over the date and type of action we will take.

UNISON is the UK’s largest health union with 300,000 NHS members in England.

Posted by Kev on September 19th, 2014 in National News