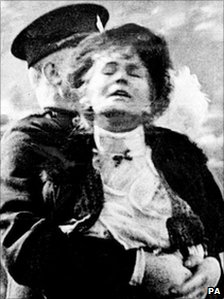 Pankhurst was a leading British women’s rights activist, who led the movement to win the right for women to vote.

Emmeline Goulden was born on 14 July 1858 in Manchester into a family with a tradition of radical politics. In 1879, she married Richard Pankhurst, a lawyer and supporter of the women’s suffrage movement. He was the author of the Married Women’s Property Acts of 1870 and 1882, which allowed women to keep earnings or property acquired before and after marriage. His death in 1898 was a great shock to Emmeline.

In 1889, Emmeline founded the Women’s Franchise League, which fought to allow married women to vote in local elections. In October 1903, she helped found the more militant Women’s Social and Political Union (WSPU) – an organisation that gained much notoriety for its activities and whose members were the first to be christened ‘suffragettes’. Emmeline’s daughters Christabel and Sylvia were both active in the cause. British politicians, press and public were astonished by the demonstrations, window smashing, arson and hunger strikes of the suffragettes. In 1913, WSPU member Emily Davison was killed when she threw herself under the king’s horse at the Derby as a protest at the government’s continued failure to grant women the right to vote.

Like many suffragettes, Emmeline was arrested on numerous occasions over the next few years and went on hunger strike herself, resulting in violent force-feeding. In 1913, in response to the wave of hunger strikes, the government passed what became known as the ‘Cat and Mouse’ Act. Hunger striking prisoners were released until they grew strong again, and then re-arrested.

This period of militancy was ended abruptly on the outbreak of war in 1914, when Emmeline turned her energies to supporting the war effort. In 1918, the Representation of the People Act gave voting rights to women over 30. Emmeline died on 14 June 1928, shortly after women were granted equal voting rights with men (at 21).