The Colombian Army has reportedly killed two protesters and injured a further six more with live bullets in response to peasant farmer protests that have brought the Catatumbo region, in Northeastern Colombia, to a standstill. The Colombian Army are reported to have fired live rounds at protesters as they occupied Ocaña Airport which was being used to bring in riot police reinforcements from different parts of the country. There had already been complaints of extreme police brutality with rubber bullets and tear gas being fired from helicopters in previous days. Ambulances were being blocked from arriving. A verification mission published results on the 24 June which revealed that over fifty protesters had been injured and eight were in intensive care. Many of the fifty have had limbs amputated as a result of exploding canisters used by the Army and the Police. 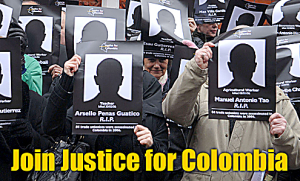 Justice for Colombia (JFC) is a British NGO that campaigns for human rights, workers’ rights and the search for peace with social justice in Colombia.

Established in 2002 by the British trade union movement, JFC was created in response to the appalling human rights crisis in Colombia, and particularly the abuses committed against trade unionists and other civil society actors.  Though our core backing continues to come predominantly from the trade unions, JFC’s support base has expanded to include the legal profession, the student movement and numerous politicians, journalists and academics and we now also have a chapter in the Republic of Ireland – JFC Ireland – and supporters in several other European countries.

Posted by Kev on May 18th, 2013 in International, Justice For Colombia

Teacher still behind bars two years after calling for a strike 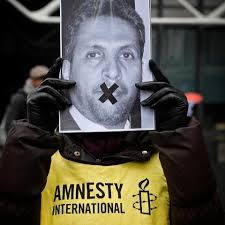 In early 2011 Mahdi Abu Dheeb, then leader of the Bahrain Teachers Association, and his colleague Jalila al-Salman called a strike to support growing calls for reform in the country. Most of us would say that they were just doing their job. But the Bahrain authorities have since made them pay dearly for their legitimate work.

By April 2011, both of them were detained. Jalila has since been released but Mahdi remains behind bars – where he has been for over two years. Please join workers around the world and: