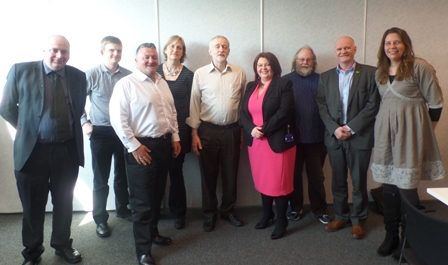 Jeremy Corbyn met with representatives of TULO (the Trade Union and Labour Party Liaison Organisation) last Thursday.  UNISON representatives from our Labour Link and Local Government Service Groups were present, as well as colleagues from Unite.

Jeremy wanted to know more about the impact of local government cuts as he was of the view that the scale of the cuts had been obscured from the public by staff taking on higher workloads.  He described this as involving council workers effectively doing “two jobs” to keep services going.

He was also interested in the impact of devolution in the North West and emphasised the need for services in less affluent areas to have sufficient funding to meet needs.  He described his concerns about the complicated and inconsistent governance arrangements that are developing across England and his backing for a constitutional convention to consider where powers should be held, who should hold them, and how they should be accountable.

Jeremy heard about the impact of cuts on our council services; the continuing crisis of low pay for staff delivering local government services – affecting outsourced workers and direct council employees; and the non-payment of the national minimum wage in the care sector.  Emphasis was put on the need for local Labour politicians to highlight the Government’s blame for inadequate funding of services.

The meeting was friendly and productive and it was apparent that we have a Labour leader with a trade union background who wants to hear about how cuts are affecting working people and communities.  We hope that there will be further opportunities to meet with Jeremy to discuss issues affecting our members across the service groups.