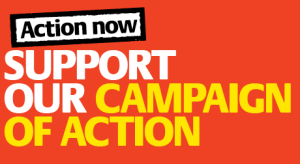 Over two-thirds of safety reps (67 per cent) taking part in the 11th biennial survey said that stress, and the effect it is having on their colleagues, is one of the main concerns they have to deal with at work.

The survey suggests that stress is a particularly high concern in the public services that have been most affected by austerity. Top-down reorganisations and back-door privatisation are having a huge impact on staff morale and well-being in the NHS, schools, local government and the civil service, says the TUC.

TUC General Secretary Frances O’Grady said: “We may sometimes joke about health and safety culture, but it’s no joke when you become the person lying awake at night from stress, made ill through long hours, a lack of control over your work or bullying in the office. Employers and managers need to do more to identify and reduce risks and to provide support to employees struggling to cope.

“The higher stress risks reported for parts of the public sector are no surprise with so many services now understaffed as a result of the government’s huge public spending cuts.

“With so many people made redundant already, and another 600,000 jobs set to go before the end of the decade, public servants feel overworked and taken for granted. No wonder morale is at rock bottom.”