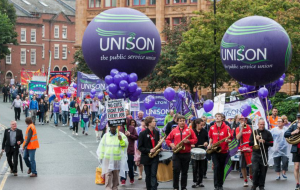 The three unions which represent more than 1.5 million workers in local government and schools – UNISON, GMB and UNITE – have today decided to suspend strike action planned for 14 October and consult their members on new proposals put forward by the Local Government Association as the best achievable by negotiation.

In doing so, all three unions have made it clear that they want to strengthen the collective bargaining machinery covering local government and schools and move quickly to jointly tackle important issues facing their members with the Local Government Association. Members covered by the National Joint Council for Local Government have the lowest pay in the public sector and have suffered significant attacks on their conditions of work in recent years.

The unions will now move forward together to consult their members.