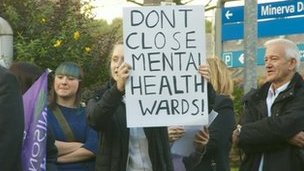 Members of Unison said they are against any closures of hospital mental health wards in Bolton, Salford and Trafford.

Greater Manchester West Mental Health NHS Foundation Trust said it is “only looking” at proposals and there will be a “thorough process of consultation”.

The trust said the “proposal is to see how we can deliver mental health services in the best way possible”.

Gill Green, director of nursing and operations, said the trust wants more community-based services to stop people having to go into hospital.

She said: “Being admitted to hospital can be a frightening and confusing experience for anyone with a mental health problem.

“Being in the position to offer care in a familiar environment is what we aim to do.”

James Gold, branch secretary of Unison which represents hospital staff, said the union “will fight to stop all the proposed closures”.

Speaking at the protest outside the Royal Bolton Hospital, he said: “People have given up their lunch breaks to come down and join this protest and that gives you some indication about how much people care about what’s being proposed.”

More on This Story

From other news sites