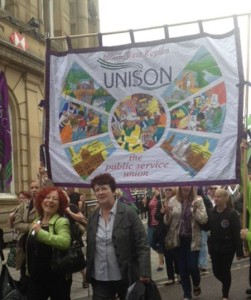 Head of local government Heather Wakefield (left) and UNISON president Maureen Le Marinel join the rally for Future Directions workers in Rochdale on 29 August
Future Directions workers who have just finished their last day of strike action marched through Rochdale Town Centre to protest against cuts to their pay, terms and conditions along with their families and friends.

Messages of support were given from branches around the country to workers who will now have taken 19 days of strike action in total.

Posted by Kev on September 3rd, 2013 in National News