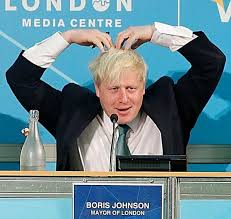 Dissatisfied with the current number of hoops that a trade union has to go through to call a democratic strike, London Mayor Boris Johnson, has called for ‘Thatcherite Zeal’ and is demanding an overhaul of the law to make it even harder to call strikes.  Johnson said it was “farcical” that a strike could be called with the backing of less than half of union members and has urged the government to rethink legislation on taking industrial action.

It would appear that Boris does not hold true the principles of democratically reached decisions despite the unions having exhausted all other means and he cynically made full use of the Former PM’s funeral to further vent his distain for those of us that make society work in the newspaper of the Thinking Man, The Sun.

He was very quickly joined by backbencher Priti Patel who said: “Defending the rights of people to work without fear of intimidation, bullying or violence is exactly what Margaret Thatcher championed.”  You can only assume then that she is, like UNISON, is opposed to the increase in qualifying time for Employment Tribunals and will stand side by side with Shop Stewards against Bullying Managers?

Frances O’Grady, TUC general secretary said the move to impose a turnout threshold on strike ballots would be “grossly hypocritical” when MPs did not need the support of 50% of all voters to win election.

“The truth is that union members – particularly in the emergency services – are always reluctant to take strike action and only do so when no other way of resolving a dispute is available and only after a proper ballot. The first thing that any dictator does is attack democratic unions,” she added.

But the true Irony of the recent outburst is that Johnson himself had less than 50% of the votes for the election of London Mayor!