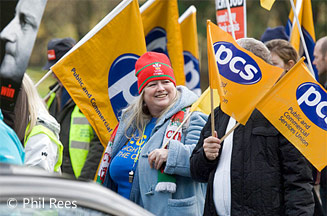 PCS has rejected an ultimatum from the government to civil service union negotiators which demands that we recommend their pension cuts to our national executive committee.

If the government refuses to negotiate, we should not merely accept that the cuts are inevitable but unite across the trade union movement to call the further industrial action, demonstrations and other action which could force the coalition government to come to the negotiating table.