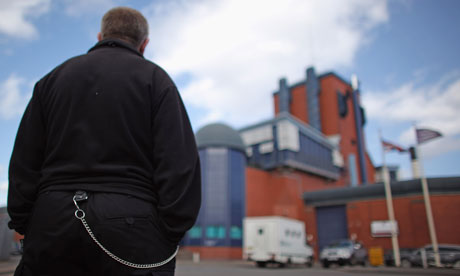 Since the farce of a general election I have potndered just which union the Tories would go head to head
with and whilst I honestly think that Cameron will try be to Unison what Thatcher was to the NUM I
suspect that first he intends to cut his teeth on the POA, the Prison Officers Association.

On hearing the Tories proposals to give HMP Birmingham and HMP Featherstone 2 (new build) to
the Private Sector to run, namely G4S, Steve Gillan, General Secretary of the POA said: “This is a
disgraceful decision. Prisons should not be run for the benefit of shareholders nor for profit.  The State
has a duty to those imprisoned by the Criminal Justice System and this Coalition Government have
betrayed loyal Public Sector Workers for their friends in the Private Sector”.

Anyone going to work within the prison service must be prepared to work in one of the most challenging
environments, with a single employer who now appears hell bent on a fight and a trade union that, with
a determination to stand and fight to ensure that their prime objective of trying to reach and rehabilitate
some of the most damaged and dangerous people in society does not take second place to profit, will
stand up for themselves.

And who is lurking in the shadows behind Cameron? None other than Maggies henchman, the
honourable Justice Secretary Kenneth Clarke who has served every Tory Prime Minister since Thatcher
well and has a record of class war that can hardly be matched throughout his party.

Ever the peacemaker Clarke has started as he clearly means to go on announcing that he intended
to privatise three prisons warning that he would bring in the military if the prison officers’ union had
the temerity to resist the sell-off, let alone strike. A more deliberate and cold calculated provocation is
difficult to imagine.

The position of our fellow trade unionists is easy enough to understand. After all, everyone knows that
the prison service has been struggling with an increased workload and strangled resources for years
very much like our own Probation Service.

So for Clarke to announce that these privatisations are there in order to cut costs by “£216 million over
the life of the contracts” he can achieve nothing but inflammation of hard-working prison officers who
have had their jobs cut to maintain an under-resourced system for decades.

He can challenge POA with confidence in the full knowledge that a reserve power putting a legal ban on
prison officers taking industrial action was reimposed by Labour minister Jack Straw in 2008.

There should be no doubting the prison officers’ courage and commitment to the fight against
privatisation which they have shown before, when in 2007, POA risked everything to hold a 12-hour
protest and I am sure they will show that same courage again. It is for all trade unionist to support their
cause when the rallying call is heard, not just in support of the POA but in support of every trade unionist
whose livelihood is threatened and every free thinking individual who believes that Public Services are
for public benefit, not private profit.

BTW did you know that an anagram of David Camerons name is “A mad con drive.”?