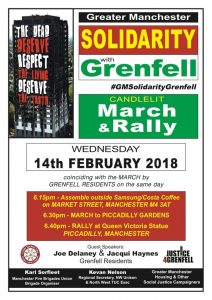 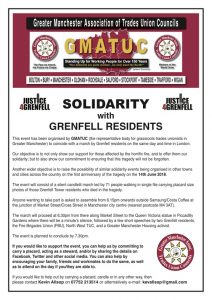 A commemorative march in Manchester on the seven month anniversary of the Grenfell disaster, led by Grenfell Community members.

Organised by Manchester Association of Trades Councils and community groups, and Manchester residents who wish to express solidarity.

Silent marches led by Grenfell community members have taken place on the 14th of every month in London to commemorate the lives of those who killed in the Grenfell Towers disaster. In February the first such march will take place in Manchester.

Our event will consist of a silent march led by people walking in single file, carrying placard size photos of those Grenfell Tower residents who died in the tragedy.

We will assemble at 6:15 to distribute placards and the march will proceed at 6.30pm (prompt to coincide with the March in Grenfell itself) from the covered area outside Boots, Market St along Market Street to the statue in Piccadilly Gardens where there will be a minute’s silence, followed by a few short speeches by two Grenfell residents, The Bishop of Manchester, the Fire Brigades Union, North West UNISON & TUC, and Greater Manchester Housing activists.

Kev Allsop, one of the organisers of the march said:

“On February 14th, the people of Greater Manchester will stand in love and solidarity with the 71 people of Grenfell who lost their lives, and those that are left behind to grieve without their loved ones; their possessions or anywhere to call home.  We will welcome Grenfell activists Jacqui Haynes and Joe Delaney to Manchester to march with us in that hope that they can take back a message to the Grenfell community that they are not alone, that the people of the northwest will honour the working class principle of standing side by side with those that have been betrayed by the state.”

Posted by Kev on February 5th, 2018 in National News