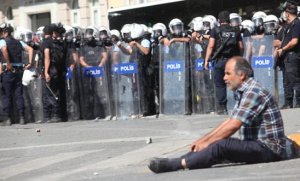 On 27 May, a few hundred activists gathered in Gezi Park, one of the few green spaces in the centre of Istanbul, to protest against its planned destruction to make way for a shopping centre. A couple of days later, in the early hours of 29 May, police began to disperse the protestors, using excessive force.

Word spread and thousands more people joined the demonstrators.  They too were met with tear gas, water cannon and beatings. As police cleared the park in the early hours of Friday morning (31 May) scores were injured.